The World Health Organization (WHO) encouraged countries to focus on improving their COVID-19 response instead of waiting for the vaccine to arrive. WHO Western Pacific Regional Director Dr. Takeshi Kasai cited that countries should not overly rely on the development of a vaccine as there might not be enough supply during the initial production of the approved drug due to its high demand. The Philippines is one of the countries eagerly awaiting the production of a vaccine that can build immunity against the SARS-CoV-2. Several government policies hinge on the much-awaited arrival of a vaccine, including the return of face-to-face classes in schools and the lifting of lockdown restrictions.

The UP OCTA Research Group has amended its projection for COVID-19 cases by the end of the month, seeing 220,000 total infections instead of the initially projected 250,000 - a "good result" because of the two-week stricter lockdown in Metro Manila and nearby provinces. The capital region, along with nearby provinces Bulacan, Cavite, Rizal and Laguna, were placed under the stricter modified enhanced community quarantine (MECQ) from August 4 to 18 on the appeal of exhausted health workers in the frontlines of the virus fight.

The Philippine Red Cross as of September 7 has tested a total of 718,501 specimens since it opened on April 14 of this year.

The Red Cross at an average is testing 10,000 to 12,000 people every day. Moreover, with the recent opening of Molecular Laboratories in the southern regions of the Philippines, these figures are expected to exponentially increase in the coming weeks. 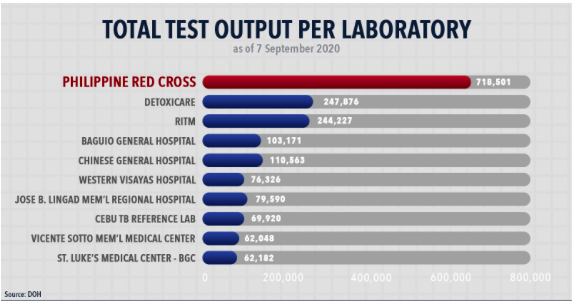 In Bacolod City, Negros Occidental, the molecular laboratory can process up to 2,000 tests a day to further scale up the country’s capacity in its the fight against the coronavirus in the Western Visayas region. 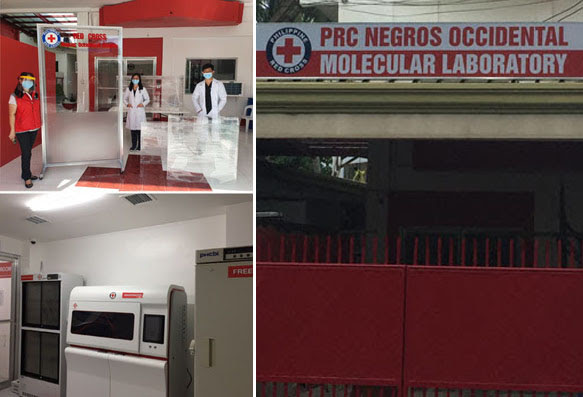 Meanwhile, the 20th Molecular Laboratory of the Philippine Red Cross was inaugurated on September 4. It is located at Pettit Barracks, Zamboanga City. Similar to the Bacolod facility, it is equipped with two (2) PCR machines and one (1) RNA extractor and has a capacity of 2,000 tests per day. This will not only test people in Zamboanga City, but the whole Zamboanga Peninsula and nearby provinces, including Basilan, Sulu, Tawi-Tawi, Dapitan, Dipolog, Isabela, and Pagadian. 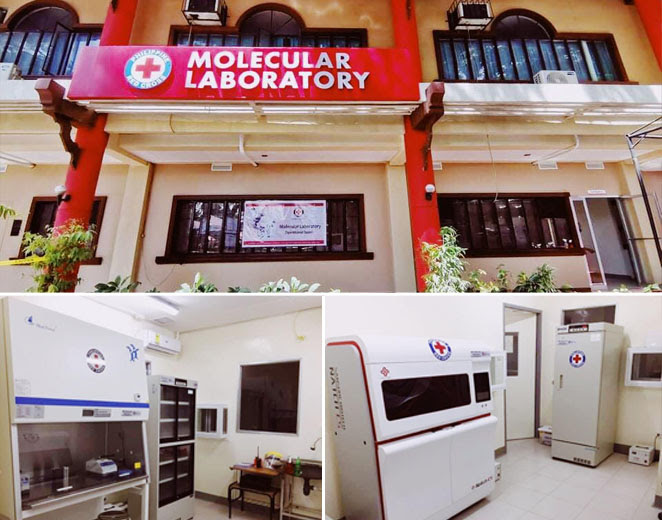 PRC “Helpline (1158)” has been established to take calls related to COVID-19 and service the public. It is operational 24/7 and run by trained volunteers in psychosocial support.

Support to Healthcare Systems and Authorities The pandemic has greatly affected our healthcare system because of the decrease in the accessibility and availability of the quality of care and facilities all over the Philippines.

The Red Cross has shown support to the healthcare community and authorities by mobilizing its medical tents. The PRC has set up 71 medical field tents, which served as staging and isolation wards and were set up in different parts of the country with 8,020 people served. The PRC together with IFRC and UNICEF also mobilized additional medical tents in Metro Manila, Laguna and Cebu as cases continued to increase and with limited available rooms in selected hospitals. 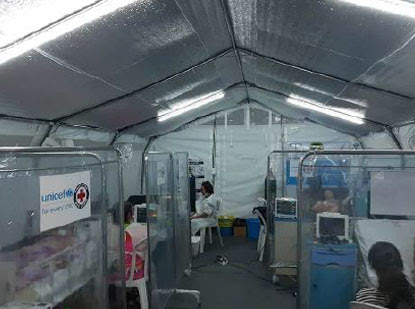 The Red Cross was also able to set up tents at the Freeport Area of Bataan to support the factory workers and employees in Mariveles, Bataan. 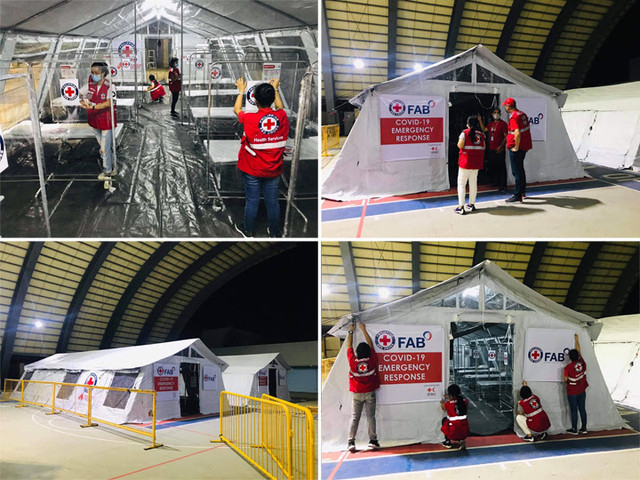 The Convalescent Plasma Center located at the Port Area, Manila is operating and serving COVID patients in Metro Manila. A total of 145 units were collected and served 118 patients as of this reporting period. The procedure involves the extraction of blood plasma from COVID-19 survivors and giving it to patients who are still battling the disease, as the yellowish blood component is expected to contain antibodies against the virus. 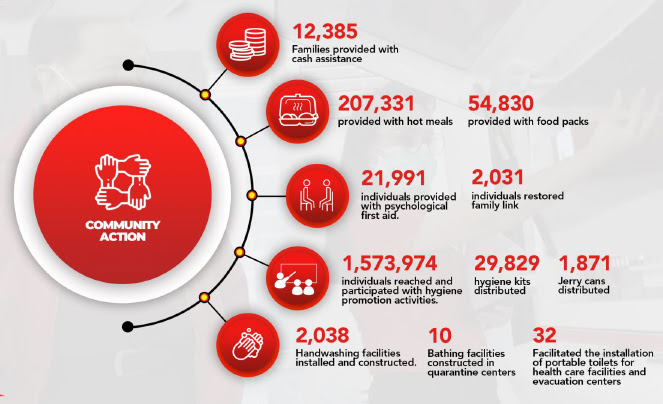 Awareness sessions were conducted regularly in communities including those that are particularly vulnerable to epidemics due to poor hygiene and sanitation conditions.

To date, 1,573,974 people were reached with hygiene awareness activities of the organization. The key messages include the proper use of facial masks, physical distancing, and hand hygiene and respiratory etiquette. In terms of reinforcing behavior, PRC together with its partners have distributed hygiene kits in the community as well as to the COVID19 patients and their families. The PRC also established 2,038 handwashing facilities in different parts of the country. PRC together with UNICEF has started the distribution of cleaning kits for health facilities and quarantine areas across Metro Manila. A total of 112 facilities have been provided with cleaning kits. The PRC is closely working with IFRC, ICRC, American Red Cross, Netherlands Red Cross & UNICEF to scale up the needs and gaps in terms of WASH.
Amid the COVID19 pandemic, the Red Cross volunteers are protecting children from life-threatening diseases such as the polio virus, an incapacitating and implicitly deadly infectious disease. Red Cross 143 Volunteers have gone house-to-house to deliver life-saving polio vaccines while observing health and safety standards. The PRC supported the DOH with the help from IFRC and ICRC in scaling the polio vaccination program in line with “Sabayang Patak Kontra Polio”.

The National Headquarters welfare team together with the Rizal-Taguig Chapter assessed the needs of the locally stranded individuals (LSIs) waiting for a mercy flight to Mindanao. They were staying at the sidestreet of Heritage Park Pinagsama Taguig City. There were 101 LSIs who stayed under the scorching heat of the sun and needed basic needs such as water, hygiene kits, food, and shelter. The team was able to provide packed lunches and evaluated the needs of vulnerable people in the group, such as a pregnant lady who was almost full term and about to go into labor any time soon, a 3 month old baby, elderly, and children. The team was able to coordinate with nearby hospitals for emergency cases and the LSIs were transferred to the EP Housing Covered Court. 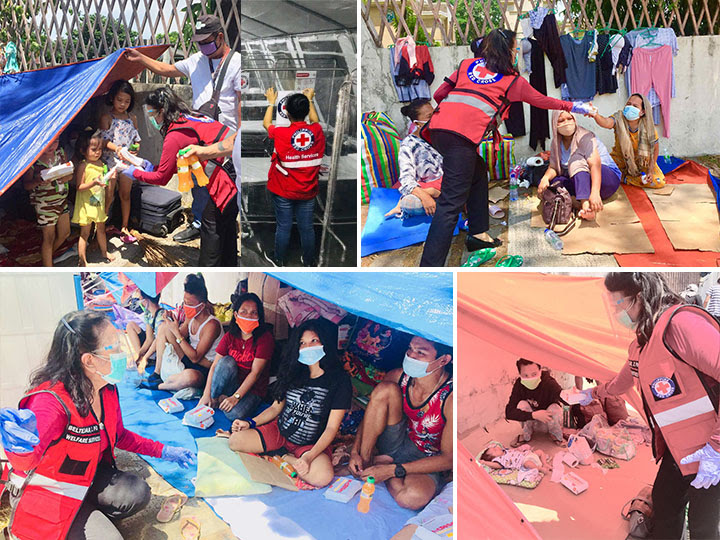 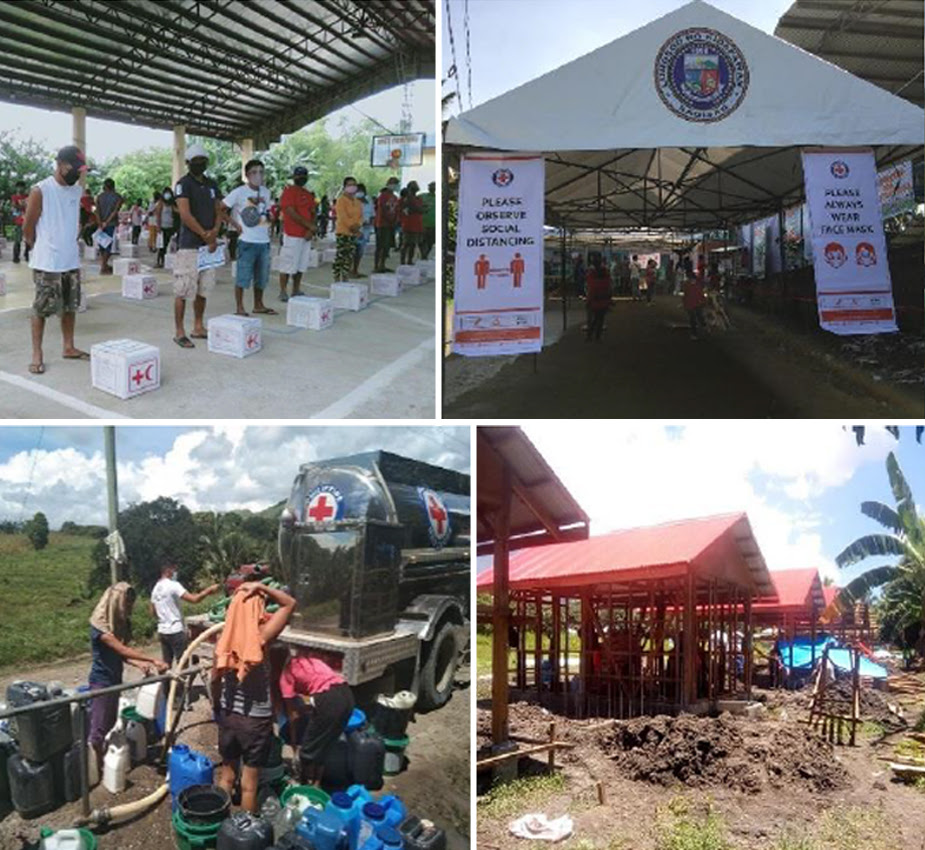 The Flood Resilience project was implemented despite the COVID19 pandemic, with the successful distribution of 1,300 hygiene kits to flood-prone communities in Pangasinan. With the support of the IFRC and ICRC, the PRC provided cash grants to families affected by the Mindanao earthquake in Davao Del Sur and North Cotabato, providing livelihood support as well as water, sanitation and shelter needs.

As of the moment, PRC can only accept monetary donations. Should you wish to lend a helping hand, here are your options:

NOTE: Please send a copy of your deposit slip to: [email protected]

You may also visit our online donation platform: 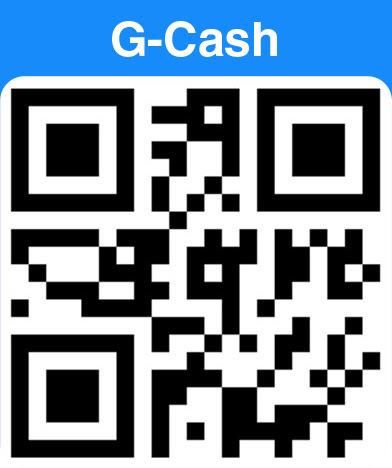 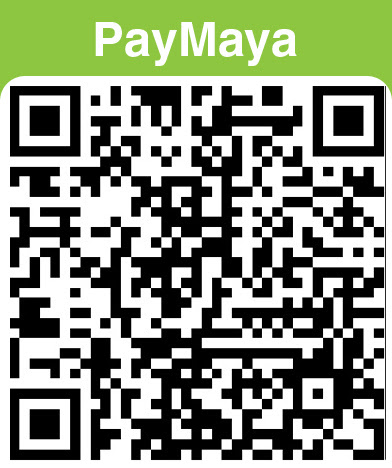