Written on November 25, 2019. Posted in News and Events. Leave a Comment 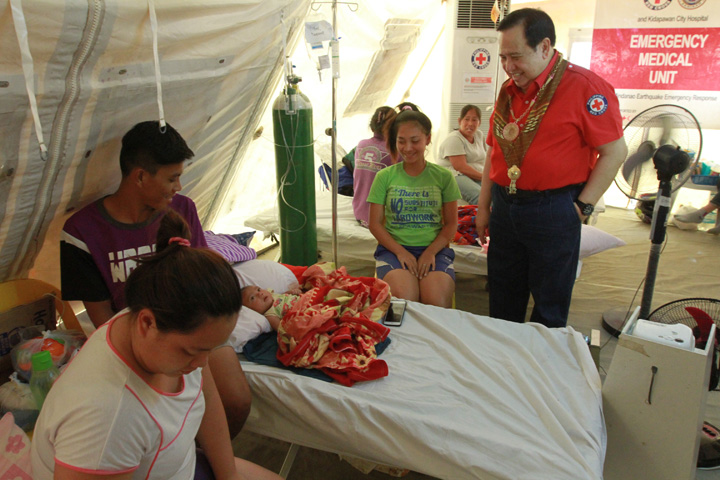 After visiting the emergency medical tents in Kidapawan City, Philippine Red Cross Chairman and CEO, Sen. Richard Gordon ordered for more tents with more beds to be added to avoid patients sharing beds with those caring for them as this may cause disease transmission. Along with these, portable toilets and water bladder will also be added to support proper hygiene and sanitation and to ensure adequate supply of water. As for Davao del Sur, shelter assistance will be given after assessment and another water bladder will added to the operating assets of PRC.

Red Cross volunteers and staff on the ground have provided the affected population with immediate relief items such ambulance to transfer the injured and hot meals to the evacuees. Distribution of tarpaulins and hygiene and sleeping kits also followed soon after as well as the deployment of water tankers and bladders. As the team further assesses the needs of the affected communities, PRC distributed more of these essential items to 777 families in Kidapawan City, North Cotabato and Magsaysay, Davao del Sur yesterday.

During the distribution, Chairman Gordon taught the beneficiaries about the 4Ps – predict, plan, prepare and practice. This aims to empower communities and teach them the importance of being prepared should disasters strike. Stressing that Red Cross is not a charity institution, Chairman Gordon emphasized the importance of preserving the dignity of the beneficiaries and not being a “hand-out” organization.

“We don’t want a culture na pahingi. Ang kultura natin dapat, “Kaya natin ‘to. Makakabangon tayo. The quicker people go back to their normal life, the better,” say Chairman Gordon as he eyes livelihood programs next. This is why the Red Cross distributes relief using the “latag system” preserving the dignity of the recipients as they personally pick their items up to carry them to their homes. Also, community engagement and consultation is done to better understand what early recovery program suits the community.

For Kidapawan City, 420 families received hygiene kits and food items while 357 families from Magsaysay received food items (FIs) and non-food items (NFIs) such as sleeping and hygiene kits, jerry cans and tarpaulins. Hygiene kits are vital due to the high risk of catching diseases in evacuation centers as these places are often crowded and practice of sanitation is a challenge. Jerry cans greatly help evacuees as water supply has been problematic since the earthquakes. Tarpaulins provide temporary shelter.

PRC provides the basic needs to ease the difficulties the affected residents are going through.