PRC intensifies operations amidst series of strong earthquakes in Mindanao

Written on November 1, 2019. Posted in News and Events. Leave a Comment 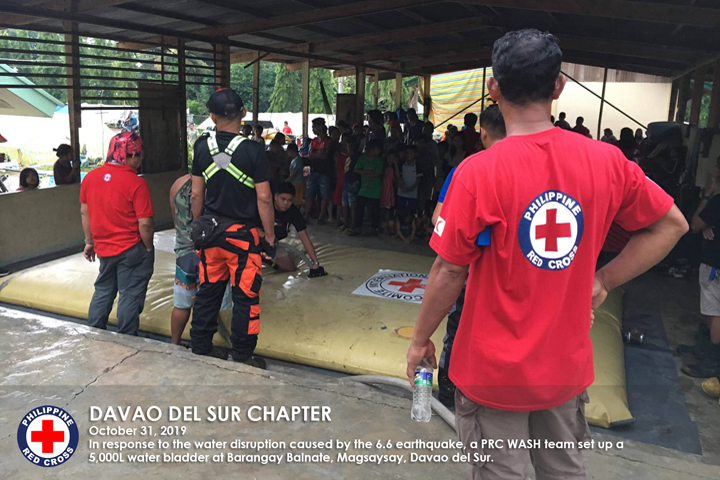 The Philippine Red Cross (PRC) intensified its operations after a magnitude 6.5 earthquake hit several parts of Mindanao, Thursday morning, October 31, 2019. This is the third time in two weeks that a strong quake jolted Mindanao.

PRC’s army of volunteers and staff rushed to treat injured patients and are continuously assisting affected individuals, especially those in badly hit areas in North Cotabato and Davao del Sur.

“We are all in this together. Since the first earthquake struck Mindanao on October 16, our team has been working round-the-clock, providing first aid and other humanitarian services like distribution of hot meals to the affected residents, such as those in Balabag Barangay Hall in Kidapawan City, North Cotabato which serves as temporary evacuation center for 400 affected individuals,” PRC Chairman and CEO Richard Gordon said.

The PRC deployed 8 teams consisting of 2 from North Cotabato, 1 from Davao del Sur, 2 from South Cotabato, 1 from General Santos City and 2 from National Headquarters to conduct assessments and augment the chapters’ operations in different areas of Mindanao.

PRC North Cotabato Chapter sent teams to assess the situation in Kidapawan City and Barangay Ilomavis while volunteers and staff from Davao del Sur set up a temporary station and also deployed a team to conduct an assessment within the vicinity of their area.

PRC South Cotabato Chapter positioned its teams to assess the situation in the KCC Mall and Public Market due to a reported panic incident, a roving team was also mobilized by General Santos chapter within its area.

In order to save lives and to meet the demands of the affected residents especially the most vulnerable in the hard hit areas, PRC placed safeguards on the chapter’s blood bank refrigerated storage facility in Davao Del Sur Provincial Hospital particularly against power interruption.

The PRC Ozamiz City Chapter warehouse is on alert status ready to deliver non-food items for the affected communities in North Cotabato and Davao del Sur.