Written on January 4, 2022. Posted in News and Events, odettePH. Leave a Comment 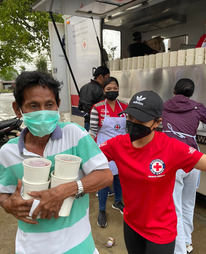 “No matter what the circumstances are, we will always be the first responders whenever a disaster or emergency strikes as we continue with our mission to send hope, especially to the most vulnerable,” said PRC Chairman and CEO Senator Dick Gordon.

With the province currently under the State of Calamity, volunteers and staff also aim to provide 500 sets of food Items in the Mabinay Borders and deploy a water tanker in Bindoy to reach out to more affected barangays.

Since December 18, 2021, PRC has been conducting typhoon Odette operations in Negros Oriental. Volunteers and staff assessed the damages, distributed water, and relief items, provided hot meals, conducted hygiene promotion sessions, prepared an ambulance with subsequent First Aid Stations, and set up a welfare desk to serve those affected by the recent super typhoon.