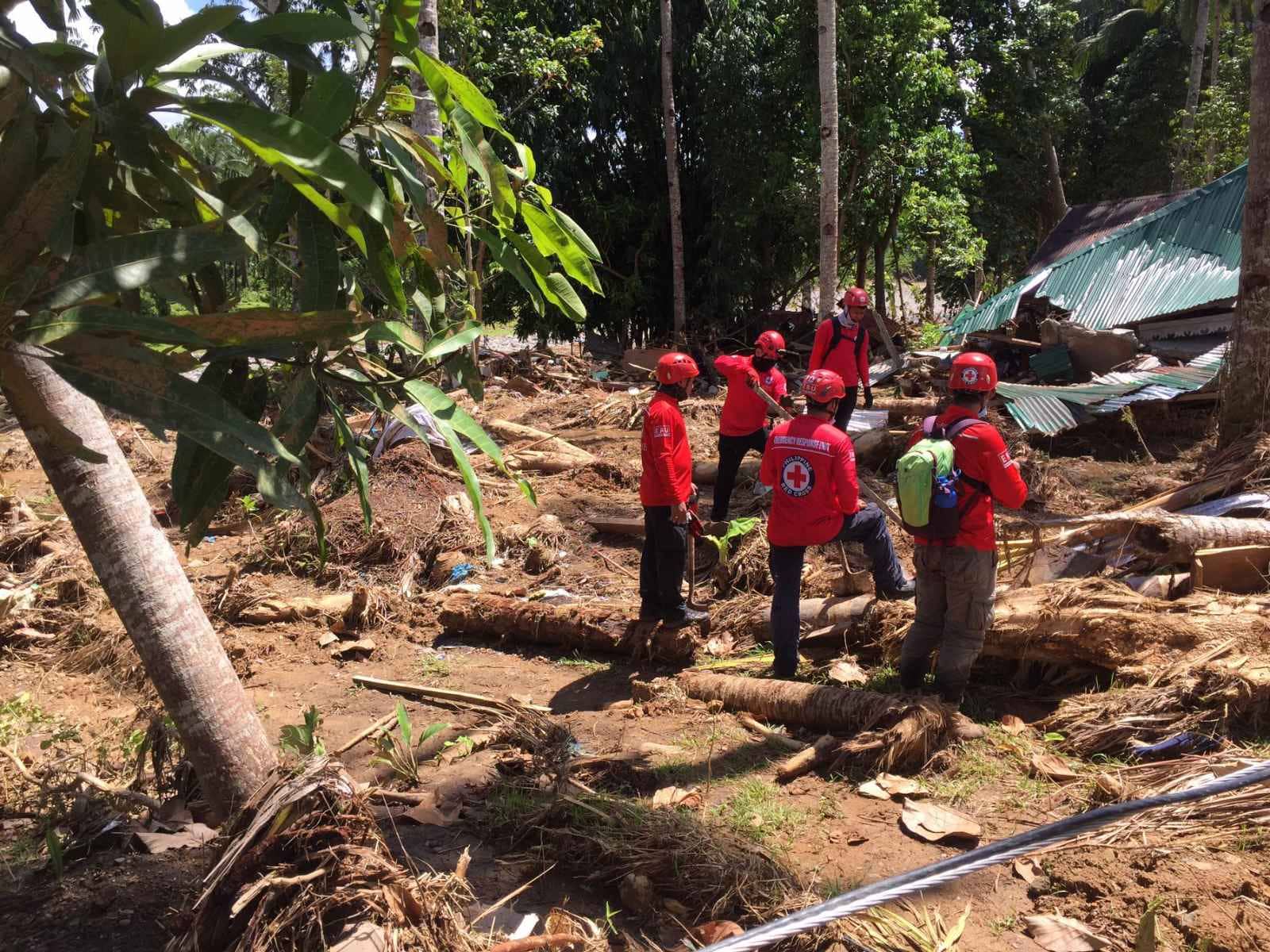 The Philippine Red Cross (PRC) Chairman and CEO, Senator Richard “Dick” J. Gordon, directed the PRC team in Baybay City, Leyte, to continue its support for the local government in its Tropical Storm (TS) Agaton response. Senator Gordon’s directive came 13 days after the first PRC search and rescue team arrived in the city and started rescue and relief operations in the area. The PRC Emergency Response Unit (ERU) continued to work alongside the city’s own emergency response unit in retrieval operations in landslide-affected Barangay Kantagnos.

Also yesterday, the Water, Sanitation, and Hygiene (WASH) team distributed 23,300 liters of water: 11,300 in Baybay National High School, 6,500 in Barangay Hipusngo, 1,200 in Zone 14, and 4,300 in Zone 18. The PRC response team in Baybay regularly coordinates with the city government to guide its actions.

To ensure implementation of his directives, Senator Gordon continues to monitor the situation in Baybay and other TS Agaton-affected areas. He assured the affected residents that the Philippine Red Cross “will be here for the long haul, as usual.”

On April 11, after multiple landslides were reported in Leyte due to heavy rains brought by Tropical Storm (TS) Agaton, PRC sent a search and rescue team to assist the local government of Baybay City. On April 12, a PRC humanitarian caravan, composed of a water tanker, an ambulance, and a mobile kitchen arrived in Baybay. Two more teams were added afterward, to reinforce the ambulance services and help provide welfare services, such as distributing hot meals and providing psychosocial first aid. 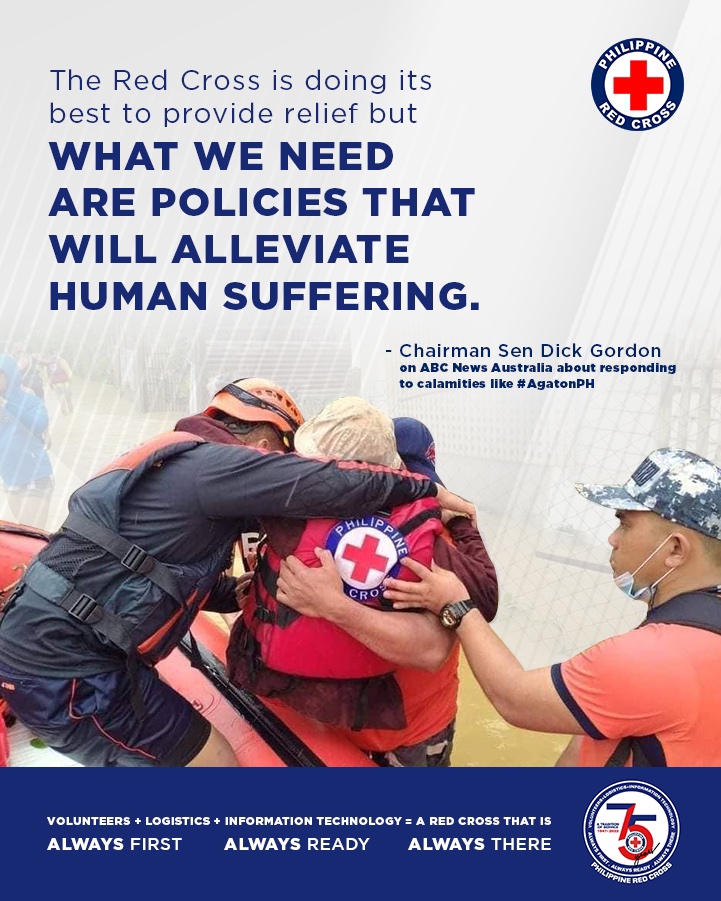 In an interview with ABC Australia on Tropical Storm Agaton (international name: Megi) last April 13, 2022, via Skype, the Philippine Red Cross (PRC) Chairman and CEO, Senator Richard “Dick” Gordon emphasized the need for a long-term plan to make sure people have the option to live in safe areas and not in dangerous ones, such as at the foot of mountains or near oceans. “There has to be a long-term plan, a big sit-down to ensure every province can make some alternatives for the people,” Chairman Gordon said.

This is the policy change Gordon wishes to see after the elections, he said when asked whether the campaign season has affected the Philippines’ assistance to areas hit by Agaton. He explained that the country will alleviate human suffering by making sure it prevents it by predicting the areas that are prone to disasters and adopting appropriate policies.

The Chairman has been an advocate of a national policy to move people living in dangerous areas to safer places. PRC built homes in a safer place for the survivors of the 2006 landslide in Barangay Guinsaugon, Saint Bernard town in Southern Leyte, which killed around 2,000 people. PRC also built or repaired homes for survivors of Super Typhoon Yolanda (international name: Haiyan), which caused ocean surges as high as six meters and devastated the Eastern Visayas region in 2013. Overall, the PRC has built or repaired 80,000 homes for survivors of calamities in Eastern Visayas.

Chairman Gordon swore that the Red Cross will be helping populations affected by TS Agaton in the long run, as it usually does for survivors of calamities. “The Red Cross will be here for the long haul, as usual,” Chairman Gordon said. He mentioned that the PRC is still assisting survivors of Super Typhoon Odette (international name: Rai), which made landfall on Christmas eve of 2021.

Gordon mentioned some preparedness measures that can be adopted, such as having whistles to call for help during calamities, identifying high-risk areas and moving people, and training people especially for landslides. He highlighted the importance of having pre-positioned people and logistics in the regions, such as sirens, flares, pickax, shovel, payloader, torch and other lighting devices that can be used even at night. 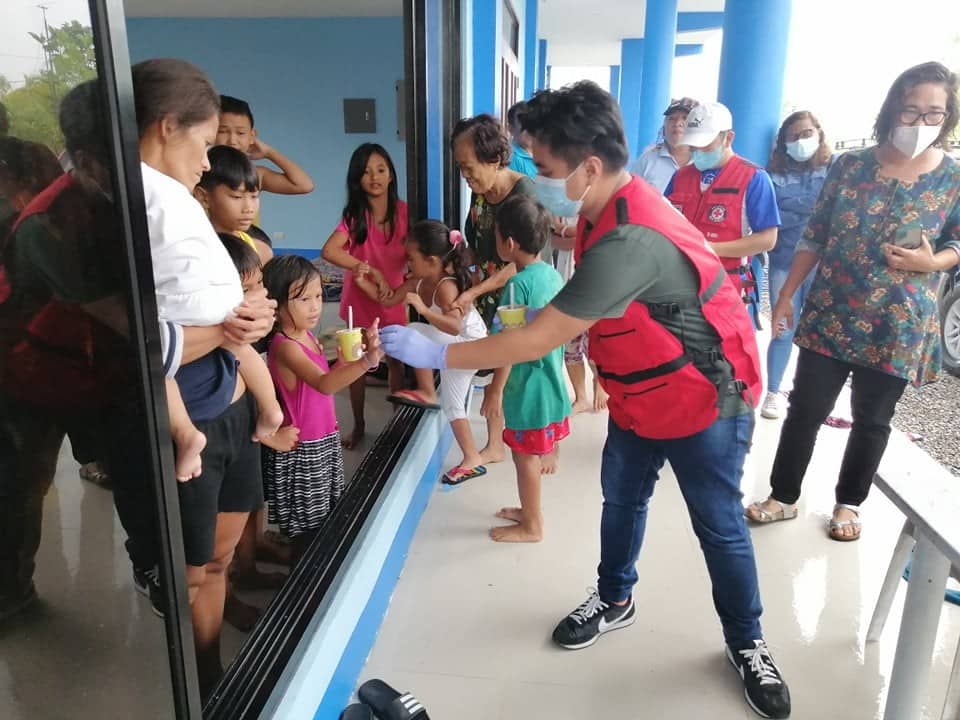 Two assessment teams from the PRC chapter in Leyte, together with the search and rescue team, the ambulance team, and the welfare services team left for Baybay City and Abuyog town today. The chapter also deployed floating assets, such as a rescue boat, for a water search and rescue operation in the municipality of Abuyog.

PRC Ormoc City Chapter was directed to stand ready to assist the Leyte Chapter in the operations in Baybay. PRC Eastern Samar Chapter has sent an assessment team to Jipapad and Guiuan towns.

Although TS Agaton has been downgraded to a tropical depression, it continues to bring heavy rains across Visayas, Mindanao, and Luzon as it slowly moves east. As of 10:00 am today, the center of TD Agaton was located over the coastal waters of Tanauan, Leyte. The PRC is monitoring the situation 24/7 and will provide further support as needed.