PH Red Cross, Chairman Gordon – one of the best in the whole world says IFRC

Written on September 20, 2022. Posted in Features, News and Events. 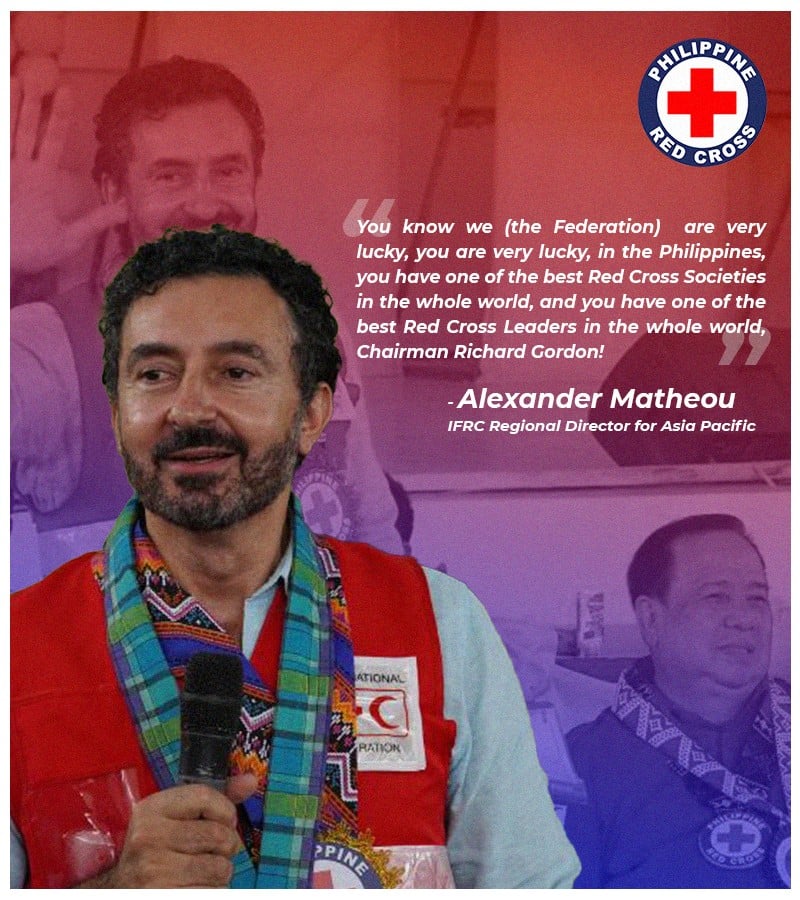 No less than the current Regional Director of the International Federation of the Red Cross and Red Crescent Societies (IFRC) for the Asia Pacific, Alexander Matheou, exclaimed that the entire federation and the Philippines is extremely fortunate to have the Philippine Red Cross (PRC) and its Chairman, Richard J. Gordon to lead the organization. Matheou said this during TY Odette Recovery Operations in the islands of Siargao and Dinagat, and in Surigao Del Norte that took place last Thursday, September 15, 2022.

Matheou said this after witnessing firsthand how PRC Chairman molded and led the entire PH Red Cross to efficiently and effectively bring much-needed assistance to the most vulnerable communities not only those who are affected by Typhoon Odette, but also other disasters that have struck the country in the last 20 years.

This is part of the more than P425 million humanitarian assistance allocated to families devastated by Typhoon Odette last December. Each families received Php 5,000.00 pesos to help them in their livelihood. Families who received emergency shelter assistance got Php 9,600.00 worth of shelter took kits, including heavy-duty corrugated galvanized iron sheets.

Matheou’s hailing of the PRC and Chairman Gordon’s leadership is not the first from the global movement.

In his trip to Marawi City last June of 2019, Peter Maurer, the President of the International Committee of Red Cross hailed Chairman Gordon for upholding humanitarian principles. Maurer extolled Red Gordon to promote the Red Cross and Red Crescent Movement’s works and considers Gordon as a “reputational pride” in the international movement.

Also last June 2019, during his visit to the Philippines, the President of the IFRC, Francesco Rocca expressed his gratitude to the PRC Chairman and the PRC volunteers. Rocca highlighted PRC’s dedicated work and how it continues to inspire across borders.

Rocca also hailed the PRC last August of this year, during the Northern Luzon Earthquake, where PRC staff and volunteers immediately responded to areas affected by the magnitude this year.

“Leadership is action, not a position. I have instilled this in the thousands of staff and volunteers across our country. The PRC will always be there for the most vulnerable in our society, before, during, and even months and years after a disaster, we will continue to be there. Our mantra is ethos, Volunteers + Logistics + Information Technology equals to a Philippine Red Cross that is Always First, Always Ready, and Always There”, said PRC Chairman Gordon. Six hundred seven families received Php5,000.00 cash assistance, while 4,249 families were provided CGI (corrugated galvanized iron) sheets and shelter tool kits worth Php9,600.00. The total value of humanitarian aid distributed amounted to Php43.825 million. Today’s distribution is part of the more than Php455 million humanitarian and development assistance the PRC has allocated to families affected by Typhoon Odette and other calamities that affected Mindanao and Visayas from December 2021 to September 2022. Philippine Red Cross (PRC) Chairman and CEO Richard J. Gordon reports that from December 2021 to September 2022, the PRC will have distributed more than Php455 million in humanitarian and development aid to Visayas and Mindanao. The figure represents only the cost of the humanitarian organization’s TY Odette response, TD Agaton response, and Peace and Development Project in the Bangsamoro Autonomous Region in Muslim Mindanao (PDBARMM). It does not include PRC’s other response operations and development projects in Visayas and Mindanao, such as its Covid-19 response.

In partnership with the International Federation of Red Cross and Red Crescent Societies (IFRC), the German Red Cross, the Spanish Red Cross, and European Union, PRC kicked off yesterday, August 24, its response, recovery, and development project distribution activities that will last until the third week of September.

Yesterday, the PRC provided cash and emergency shelter assistance to more than 400 families affected by Typhoon Odette in San Francisco and Pintuyan towns in Southern Leyte. Each family received Php5,000.00, CGI (corrugated galvanized iron) sheets, and shelter tool kits. The humanitarian aid distribution makes a total of more than 6,000 Odette-affected families in Southern Leyte who have received cash and emergency shelter assistance from the PRC since the typhoon made landfall on December 16, 2021.

In his message to the people of Southern Leyte, via Zoom, Gordon explained that other countries help the Philippines because the PRC also helps them. He added that the Filipinos have dignity and they receive help not because they are pitiful, but because they help themselves. “Masarap tulungan ang tumutulong sa sarili,” Gordon explained. “Kapag may mga ganyan [referring to disasters and emergencies], nag-a-appeal ako, nag-a-appeal po and Red Cross n’yo, at tumutulong ang iba’t-ibang bansa,” Gordon added.

PRC’s volunteers and staff then proceeded to Baybay City and provided cash assistance to 587 families severely affected by Tropical Depression Agaton, which caused heavy flooding and landslides in Baybay in April this year.

IFRC’s Head of Delegation in the Philippines, Alberto Bocanegra, praised the PRC via Zoom for its response to people affected by Odette and Agaton. “We are super proud of the work of the Philippine Red Cross, one of the most prominent National Societies worldwide — and of course the leadership of Chairman Gordon and Secretary General Elizabeth Zavalla,” he said.