Written on October 7, 2019. Posted in News and Events. Leave a Comment 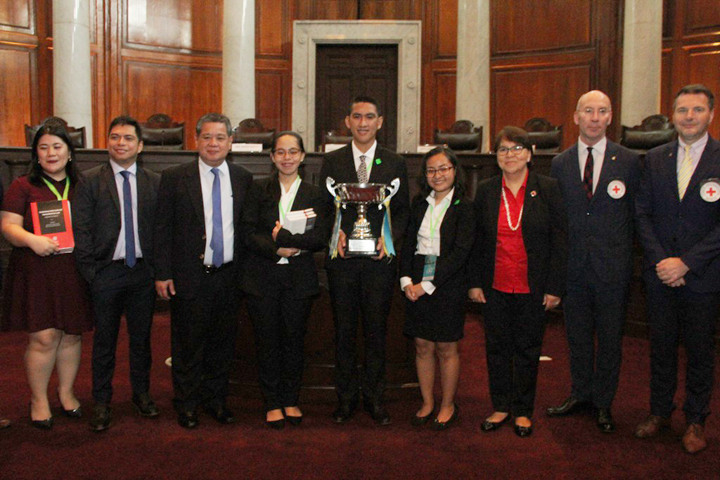 The 14th National Moot Court Competition on International Humanitarian Law (IHL) came to a close on September 27 with the University of the Philippines College of Law emerging victorious. The Philippine Red Cross (PRC) and the International Committee of the Red Cross (ICRC) co-organized this year’s competition, supported by the host school, the Manila Adventist College of Law. Closing proceedings were held at the En Banc Hall of the Supreme Court of the Philippines.

Aside from the championship title bagged by UP College of Law’s Barzillai Josh Banogon and Vanayan Odsey, the latter was also hailed as the Best Mooter during the final round. Runners-up in the competition were Lyra Nikka Zara Vivas and Godly Ann Camitan from University of Batangas (UB). Kenneth Van Encabo, who received the Justice Leonor Ines Luciano Best Mooter Award during the elimination rounds, is from the Philippine National Police Academy (PNPA), the only non-law school participating in the competition since 2015. Lastly, Saint Louis University was adjudged Role Play Competition champion.

PRC and the ICRC have been advocating IHL in the country and through competitions such as this, have reached out to the academe for support. In his speech, ICRC Deputy Head of Delegation, Boris Kelecevic specifically mentioned that “IHL does not belong to the ICRC (International Committee of the Red Cross). We want everyone to feel the ownership of the International Humanitarian Law. It doesn’t belong only to Red Cross. It primarily belongs in the field, it belongs in the battlefield where we want life and dignity of the people affected by conflict respected.”

Sixteen schools from all over the country participated in the week-long competition which included submission of memorials, role play challenges and rounds of oral arguments derived from a formulated compromis.

In a message by PRC Chairman Richard Gordon, read by PRC Governor and IHL Committee Head Atty. Lorna Kapunan, Senator Gordon emphasized the founding motto of the Red Cross Movement, “Let us be reminded of the old maxim of the Red Cross Red Crescent Movement, Inter arma caritas (among the weapons, love) Per humanitatem ad pacem (through humanity, for peace).” And a call to always bear in mind that even wars have limits.