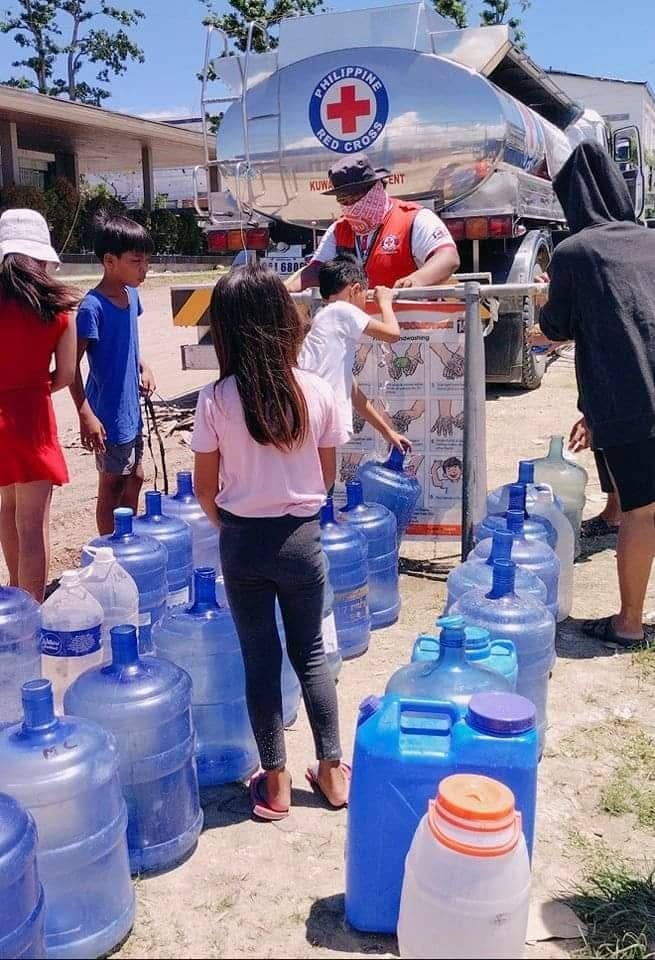 Damages to the water supply system stemming from the flooding associated with the shear line left communities in the municipality of Lopez Jaena, Misamis Occidental without access to safe water.

In a letter to PRC Chairman and CEO Richard J. Gordon dated 06 January, Lopez Jaena Mayor Andrea Cherry Pink Gutierrez expressed her appreciation for the Philippine Red Cross’s (PRC) immediate response to address the water crisis in the town. “The Municipality of Lopez Jaena is truly grateful for your generosity and support in providing drinking and clean water to our constituents in the aftermath of the calamity that struck our municipality which caused great damage to our water system,” the letter stated.

Mayor Gutierrez mentioned that the municipality is still “incapable of providing clean drinking water to its constituents”, adding that their water system in the town is still being repaired. In line with this, the PRC WASH (Water, Sanitation, and Hygiene) Unit, through the directives of Chairman Gordon, installed two water bladders in Barangay Sibugon and Barangay Biasong. The WASH unit will also install another water bladder in Easter Poblacion. According to WASH Unit, each water bladder is capable of storing and distributing 10, 000 liters of water.

Mayor Gutierrez concluded her letter by requesting for PRC’s continuous “assistance in providing clean water to its constituents” while their water system is being repaired. According to the latest data from the Philippine Red Cross’s (PRC) Operations Center, 30 barangays in Zamboanga City were affected by floods due to shear line-driven heavy rains. On 11 January, the PRC Zamboanga City Chapter distributed Doxycycline, a prophylactic agent used for the treatment of Leptospirosis, to 500 affected individuals in Barangay Guiwan and Barangay Pasonanca, Zamboanga City.

PRC Health Services explained that floodwater increases the exposure of communities to Leptospirosis and other water-borne diseases. An individual with open wounds or skin lesions can become infected through direct contact with water, soil, and mud contaminated with infected animal urine. Without immediate and proper treatment, Leptospirosis can damage kidneys and cause liver failure. Children and pregnant women, however, cannot take the medication.

Furthermore, heavy rains also displaced 1, 516 families in Western Samar, Masbate, Northern Samar, and Misamis Occidental. In line with this, the PRC placed its relief assets, equipment, and volunteers on standby to provide humanitarian assistance intuitively and rapidly to affected areas within the next 24 hours.

As of 10 January, the PRC has provided the following humanitarian aid to communities affected by shear line-induced rains since the Christmas weekend: 219,650 liters of clean and safe water through its water tankers and bladders, psychological first aid to 2,714 adults and children, hygiene education to 1,574 people, hygiene kits to 446 families, jerry cans to 355 families, water search and rescue to 201 individuals, including children, sleeping kits to 360 families, non-standard food ration and bread to 138 families, first aid services to 134 persons, and health education and medicines to 87 people.