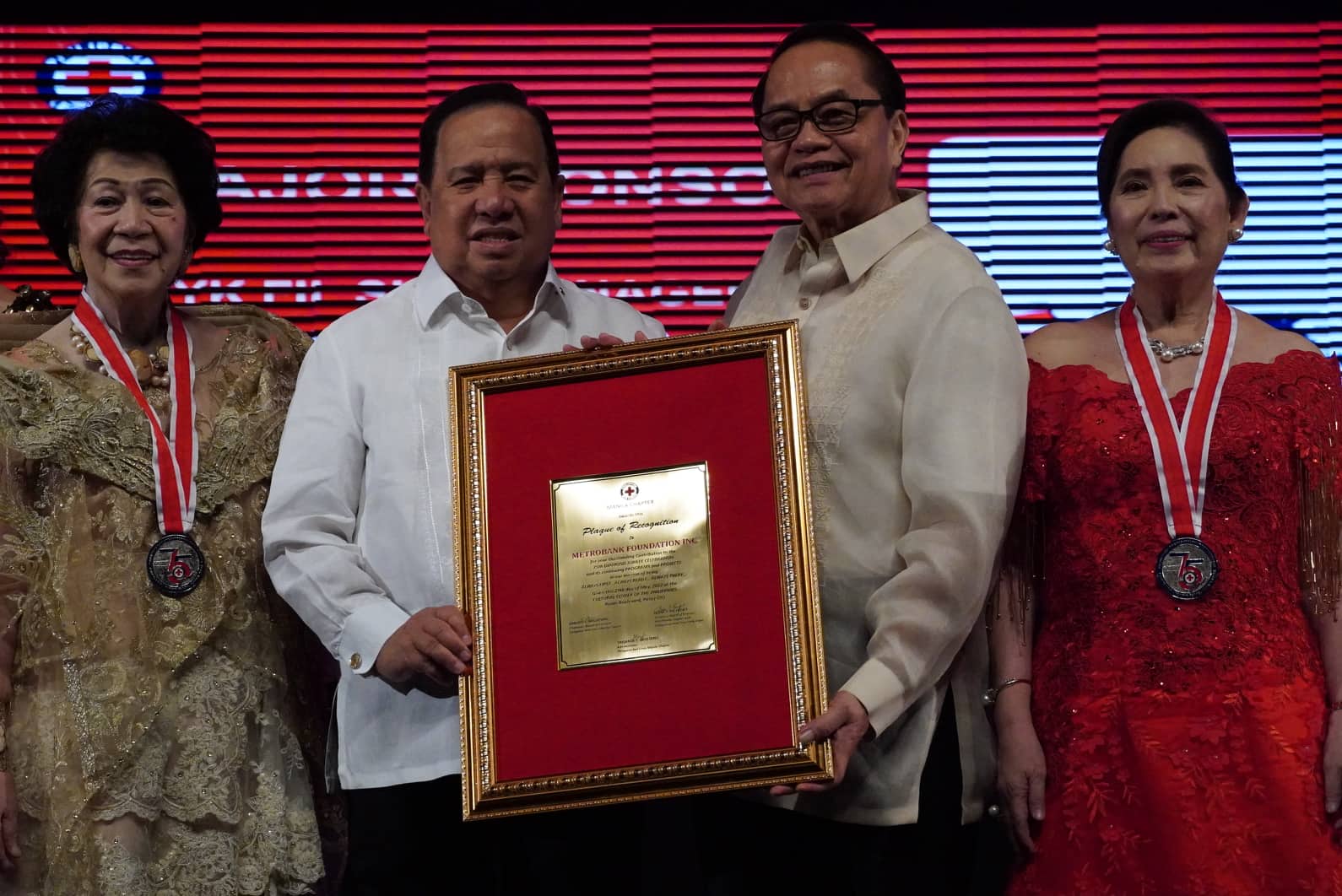 On May 29, 2022, the Philippine Red Cross (PRC) Manila Chapter, one of PRC’s pioneer branches, celebrated the premiere humanitarian organization’s 75th anniversary through a gala that showed the role played by PRC in shaping the country’s history.

PRC Chairman and CEO, Senator Richard J. Gordon, in his inspirational message, called on all Red Cross volunteers and staff to aim high, take heart, be active, and be leaders in the Red Cross. “I’m sure we will never, never put our heads down, because service to the most vulnerable is the best service of all,” he said.

Held at the Cultural Center of the Philippines, the event was attended by donors, volunteers, staff, and public officials. It was one among a series of events to be held this year in celebration of PRC’s 75th anniversary.

Senator Cynthia Villar, one of the principal guests, commended PRC for being almost always the first organization to respond to emergencies and disasters. She said that this is what makes the premier humanitarian organization stand out. According to her, being a volunteer is a calling, which requires not just talent and competence but commitment and a compassionate heart.

Senator Villar appreciated the Philippine Red Cross volunteers, partners, and donors. She explained that there is great honor and privilege to be in a position to help others. The Philippine Red Cross (PRC) welcomed delegates from the Saudi Red Crescent Authority (SRCA) on May 25-26, 2022.

PRC Managers shared with the delegates the different PRC services and best practices as possible areas of partnership. The delegates also visited the PRC Operations Center which serves as the nerve center of the organization that commands, controls, and delivers information.

“We are grateful that SCRA delegates are here with us to discuss partnership possibilities with the PRC. We are one in achieving our vision to alleviate human suffering and uplift the dignity of the most vulnerable,” Chairman Gordon said.

The two-day visit aimed at establishing strategic partnerships in areas of mutual concern to both societies. The Philippine Red Cross (PRC) Misamis Oriental-Cagayan De Oro Chapter, in partnership with the city government of Cagayan de Oro, has administered 45,888 doses of Covid-19 vaccines and boosters from 2021 to 2022 through the PRC Bakuna Teams, fully vaccinating at least 4,161 persons as of May 29, 2022. The Bakuna Teams started tracking the number of those fully vaccinated only in February 2022.

Cagayan de Oro City is currently under Covid-19 alert level 1, which means all interzonal and intrazonal travels and all outdoor activities are allowed, subject to the local government’s guidelines. The Philippines has been open to fully vaccinated foreign tourists from all countries since April 1, 2022.

The vaccinations are part of the PRC’s Covid-19 response across the country. As of May 29, 2022, PRC has administered 1,185,628 doses of Covid-19 vaccines and boosters in the whole country, with at least 372,780 persons fully vaccinated.

PRC Chairman and CEO Richard J. Gordon encourages those who have not been vaccinated and those who are qualified to have the first or second booster shots to get the shots, especially because the Department of Health has announced that Omicron subvariants have been detected in the country. “When the world no longer watches, we do what must be done. Mananatiling nandito ang Philippine Red Cross, handang umaksyon anuman ang magiging sitwasyon ng bansa laban sa Covid-19,” Chairman Gordon said.